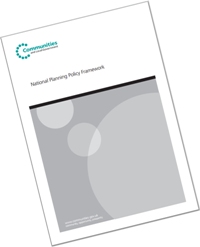 The resources listed below provide an up-to-date account of planning guidance in England. We have also pulled out the relevant elements that relate to specialist housing for older people to help you navigate the key references to housing for older people. Please note that there is a different policy background in place for Wales (see our dedicated Housing LIN Cymru pages)

The government published its Planning White Paper, Planning for the Future on 6th August 2020. Much trailed as getting Britain to "build, build, build", the measures outlined are a green light for housebuilders to construct new housing within certain confines; namely, on sites designated for growth. However, despite lobbying with other sector bodies for more favourable planning conditions for housing an ageing population.

"People over retirement age, including the active, newly-retired through to the very frail elderly, whose housing needs can encompass accessible, adaptable general needs housing for those looking to downsize from family housing and the full range of retirement and specialised housing for those with support or care needs"

The main objective of the NPPF is to provide for sustainable development including meeting the needs of present and future generations. There is an emphasis on Local Plans being underpinned by evidence of local housing needs of different groups including older people and providing for the housing that they require.

The sequel looks more like Weekend at Bernie’s 2 than the Godfather – Part 2 for age friendly housing, but with a renewed mindset the bad reviews may not matter.

LGA briefing on the NPPF

This briefing provides a summary of some of the key changes to the revised NPPF from the version consulted on earlier this year.

Published in March 2014, and updated in March 2015, this supplements the NPPF and seeks to guide development on a number of more technical issues, expanding the overarching policies contained within the NPPF.

The importance of good design is included within the "Design" chapter and includes consideration of the improvements to the well-being of people through good design. This links with the chapters on "Health and Wellbeing". It is stated that the guidance should provide commissioners, providers and developers with the tools they need to engage with Local Planning Authorities to promote healthy communities and support appropriate health infrastructure.

Planning for the Future White Paper: What future plans for housing our ageing population?

In this guest blog John Sneddon, Tetlow King Planning’s Managing Director, outlines what the White Paper covers and what to respond on, and also shares his disappointment that the White Paper failed to recognise the housing needs of our ageing population.

Guidance on housing for older and disabled people

Guidance from MHCLG for councils in preparing planning policies on housing for older and disabled people.

A new approach to developer contributions

This report by the Community Infrastructure Levy Review Group sets out to assess the extent to which CIL does or can provide an effective mechanism for funding infrastructure.

In October 2015, the government published a bill which seeks to kick-start a "national crusade to get 1 million homes built by 2020" and transform "generation rent into generation buy." The supply-side...

It is generally accepted that not enough new homes are being built to meet growing need. This briefing paper by the House of Commons library sets out how local authorities are directed to plan for housing,...

Briefing on the Changes to the 2015 Planning Practice Guidance, relating to Housing for Older and Vulnerable People

This briefing by Tetlow King Planning outlines recent changes to the government's Planning Practice Guidance (PPG) originally published in March 2014. It discusses and explains the recent changes made...

In March 2015, following consultation on accessible design standards, the government issued guidance on how planning authorities can gather evidence to set optional requirements and the nationally described...

The Association of Retirement Community Operators have published a summary of the recent changes concerning older people's housing in the NPPG (National Planning Practice Guidance). Written by Tetlow...

Laying the Foundations: A Housing Strategy for England

The Housing Strategy for England (November 2011) also launched the "New Deal for older people's housing" demonstrating the government's commitment to encouraging new models of providing specialist housing for older people. It seeks to ensure that housing and planning policies reflect the need for a wide range of specialist housing solutions for the ageing population. "Good housing for older people can enable [older people] to live healthy, independent lives and reduces pressure on working families in caring for older relatives. It can also prevent costs to the NHS and Social Care. For some older people a move to a smaller, more accessible and manageable home can also free up much-needed local family housing." (Paragraph 27).

Laying the Foundations: A Housing Strategy for England

A radical new strategy to reignite the housing market and get the nation building again was launched on 21 November 2011 by the Prime Minister. The Housing Strategy sets out a package of reforms to:...

“The Housing LIN provides the missing link between health, housing and planning, and their resources offer a wealth of information accessible to all. We are confident HLIN will continue to play an important role in guiding the sector in the future. Tetlow King Planning are pleased to be able to work with HLIN and to contribute to the debate on the topic of housing and care and the inter-relationship with planning. We have found it to be a very valuable resource.”