Shaun Ley, BBC World at One, welcomed delegates stating that all 300+ places went within hours of the Housing LIN online book system going live. Such was the demand, over 150 people on where on the reserve list! 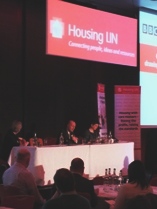 He explained that the focus of the conference was on 'A Festival of Ideas', drawing on the Housing LIN's core values - learning, improvement and networking. He encouraged delegates to share their ideas so that may lead to new partnerships, service improvements, exciting innovations or additional investment in the housing with care sector.

To find out what people said about the conference, check comments posted on twitter at #HLINconf2015

In her speech, 'From Whitehall to Town Hall' (opens new window), Carolyn Downs - Chief Executive of the Local Government Association (LGA) outlined some of the challenges facing local authorities in an austerity facing sector and how innovative ideas are needed to inspire improvements and investment in services for residents. She highlighted several examples of innovation on the ground that will be included in the forthcoming LGA report on housing and an ageing society as part of their work in response to Lord Filkin's Ready for Ageing? Report. 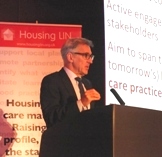 In his speech, 'What price care?' (opens new window), Martin Knapp - Professor of Social Policy at the London School of Economics and Director of the NIHR School for Social Care Research - set out the evidence base for future funding of care and support at home. Drawing on work of the NIHR, he pointed to a growing emphasis on co-creation and co-production and suggested that housing needs to be better engaged with research in this area to better understand the needs and aspirations of older people. 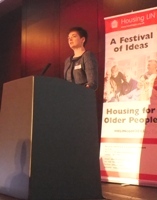 Chief Executive of Anchor Trust spoke about an 'An arch of opportunity' (opens new window) facing the sector, showcasing work future lifestyle choices but also explained some of the challenges on workforce issues around recruitment and retention in a low wage care economy. She also reported back on Paul Burstow MP's Commission on Residential Care, drawing attention to one of its recommendation that the terms 'residential care' should replaced with 'housing with care' to encapsulate all forms of care delivered in specialist housing settings.

In the afternoon, Jeremy Porteus, founder and director of the Housing LIN chaired the final session. He welcomed Pete Gladwell (Legal&General) and Richard Heaton (Cabinet Office) to the platform. 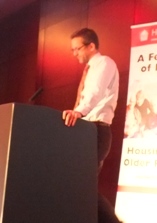 And lastly, Richard Heaton, Permanent Secretary at the Cabinet Office and Chair of United St Saviours in his speech, 'Housing and Ageing Population: Into the mainstream' (opens new window), outlined the government's investment in housing for older people, announcing the launch of Phase Two of the Care & Support Specialised Housing Fund (opens new window), and gave a passionate overview of how his charity in Southwark is working at building resilience into the local communities and through the development of a new 21st century almshouse. 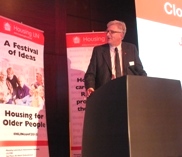 Jeremy brought the conference to a close by thanking all the sponsors, speakers, session leaders and the team of Housing LIN helpers.