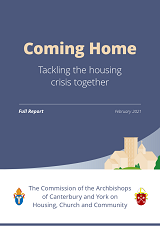 The Archbishops of Canterbury and York have produced a report on the housing crisis which I was especially interested to read, as I have recently been in contact with my local Almshouse Charity. Also, in my previous supported housing role within a Local Authority, I was aware of the significant amount of land owned by the Church of England which is potentially suitable for housing, and also the large number of assets owned by the Church which are being used and could be utilised more to build and enhance strong community life.

There are a number of examples in the report where this is already happening and the redevelopment at St Brides and Limelight in Old Trafford, Manchester was presented at last month’s Housing LIN HAPPI Hour webinar (can be viewed again), chaired by the Bishop of Kensington, which I attended and which had been arranged to “Shine a light” on the report.

Embodied in Coming Home: Tackling the Housing Crisis Together is the core value of “Sacrifice”; which requires a broad shift in mindset from the Church in order to relinquish privilege, power and potential profit. It addresses the challenge to protect the institution of the Church and at the same time make a difference. Furthermore, the worst effects of the housing crisis are being born by the poorest in society and the burden needs to be tackled by everyone and sacrifices are needed in order to solve it.

The Church owns thousands of acres of developable land and the Commission wants to work to ensure that this is disposed of in a way that does not simply aim to achieve the most profit. Rather than selling to the highest bidder, the Church needs to stay involved and help to build communities.

The Church is already doing a lot of good work in the community; however, there is a need to move on from some of the short-term work, for example providing overnight stays and food for the homeless, to also develop longer term initiatives. There is also the potential for support from other faiths and groups on the basis of a shared commitment to social justice. The Church of England like Housing Associations and Local Authorities have a presence in every area of the country therefore there is a real opportunity to build partnerships and work together. The report urges Dioceses to engage with housing specialists as a catalyst for this. They have also set up a team to help churches engage with housing need.

As mentioned above, another way in which the Church has traditionally been involved in local communities has been the provision of Almshouses which, similar to modern day sheltered or retirement housing has, in some cases for many centuries, housed older people in a Christian and caring environment. A number of Almshouse Charities have been reviewing their services, installing modern telecare services and implementing intensive housing management, in order to promote independence for residents and at the same time make the service more financially sustainable. This can potentially enable them to extend their charitable role and tackle poverty and homelessness within the wider community, rather than just supporting those accommodated in the Almshouses.

The report proposes that the continued focus on supply is flawed, and that the main issue is affordability. You can’t “build enough” to make housing affordable and nowhere in the world does the market work alone. Unlike in other countries the UK has housing targets in terms of overall supply but not targets for affordable housing.

It is inevitable therefore that Developers will maximise their return by only releasing units in a way that upholds market values. There is therefore a need for a significant increase in capital subsidy for affordable housing.

There is also, the report argues, the need for a fundamental review of the welfare system. Beveridge acknowledged that housing costs vary widely therefore they could not be included in a national system in the same way as other basics such as food. The system of Local Housing Allowance attempted to address this by defining “affordable” as 80% of local market rent, however this is not genuinely affordable in many parts of the UK. In addition there has been a departure from this principle since housing costs were included in Universal Credit, which is capped. Even the recent relaxation due to Covid-19 has not increased the benefits cap, therefore it has not addressed the regional and local variations in housing costs, and in some cases families need to choose whether to “heat or eat”. The welfare reform in recent years (regardless of political party) have been led by fiscal policy rather than welfare policy and the report calls for this to change and for subsidies for housing costs to be linked to earnings.

At the recent Housing LIN event, the answer to the criticism that this has all been said before and that it is saying the obvious, was that it needs to be said again! We need a sense of shared national endeavour. The same message has been coming from housing experts for years, it is now also coming from people outside the sector because we clearly need to be “all in this together”.

If you are interested in finding out more you can engage with your local Diocese or refer to the Executive Team at the Commission; or in due course contact the Bishop of Chelmsford who is about to be appointed as the “Housing Bishop”. In addition, they have just announced a new Commission on Reimagining Care (opens new window) to be led by Anna Dixon, the current Chief Executive of the Centre for Ageing Better.

Lastly, if you would like to find out more about how the Housing LIN can support you develop your housing for older people strategic vision and/or operational plans to meet the future accommodation needs of older adults, please email us at: info@housinglin.org.uk