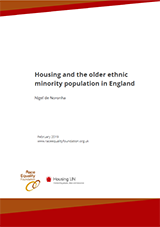 This report, commissioned jointly by the Housing LIN and the Race Equality Foundation from Nigel de Noronha at the University of Nottingham, highlights the significant extent to which older black and minority ethnic people experience housing disadvantage compared to the white British population.

In particular, key headlines from the research include the following findings:

As the older population becomes more diverse, it becomes ever more important that strategic housing and planning leads, housing providers, and designers and architects, consider the housing needs, challenges and aspirations of all older people, and people who will be reaching later life in the coming years. This paper addresses a much-neglected area of housing policy and research, and makes suggestions for where further research is needed in this area.