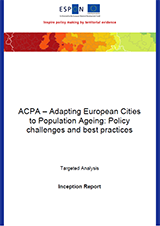 The eight stakeholders involved in ACPA, Amsterdam, Barcelona, Gothenburg, Hengelo, Greater Manchester, Nantes, Oslo and Zaragoza, have some of the highest percentages (>20%) of older people in their population in Europe, projected to increase to over 30% by 2030. These cities also experience increasing levels of transnational migration, spatial segregation, and pockets of deprivation, which impact on the lives of older people.

Consequently, these cities need to adapt their policies and deliveries to better meet the needs of older residents.