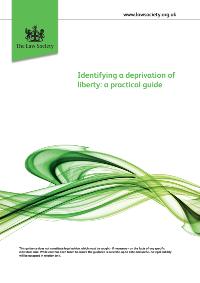 It is unlawful for any person to deprive any other person of his liberty except under certain circumstances and with due legal authorisation. A Supreme Court judgement in March 2014 defined deprivation of liberty in such a way as to reduce the threshold at which someone is deemed to be deprived of their liberty if they lack the mental capacity to agree to the arrangements. This applies in housing settings as well as care homes and hospitals.

In hospitals and care homes an authorisation mechanism called Deprivation of Liberty Safeguards (DoLS) gives a local authority the responsibility as the "supervisory body" to authorise a deprivation of liberty for care and treatment in a person's best interests. In housing settings, if someone lacks the capacity to decide where they should live, and the level of care they need, and if they are in receipt of publicly funded or arranged care services, authorisation currently requires an application to the Court of Protection.

The Law Commission has been tasked with reviewing DoLS and considering their extension to housing settings. The will be conducting a four-month consultation on recommendations in the summer of 2015 and publishing their final report and draft bill in the summer of 2017. In the meantime, authorisation needs to be gained through the Court of Protection.

The resources on this page begin to set out relevant law and issues in relation to the housing sector. It does not include information on deprivation of liberty safeguards (DoLS) which apply to hospitals and care homes.

The Right to Freedom and Safety: Reform of the Deprivation of Liberty Safeguards

In response to the Joint Committee on Human Rights' reform of DoLS, the Housing LIN has issued a number of resources to support your understanding and application of the legislation and codes associated with the Deprivation of Liberty Safeguards.

This briefing paper from the House of Commons library gives background information of DoLS whilst documenting any recent or proposed changes to them.

The Right to Decide: Towards a greater understanding of mental capacity and deprivation of liberty

This report recommends the replacement of the current Deprivation of Liberty Safeguards with a new regime called The Liberty Protection Safeguards for people who lack the mental capacity to consent but need to be deprived of their liberty for the purpose of care treatment.

An Interim Statement on the Mental Capacity and Deprivation of Liberty project was published by the Law Commission on 25th May 2016. You can download a copy of the statement below. The final report with...

Review of deprivation of liberty safeguards

This presentation was given by Tim Spencer Lane to two special housing events on deprivation of liberty. Tim is the Law Commission's project lead, and this presentation outlines the key elements of...

Deprivation of liberty: a practical guide

The primary focus of this guide by the Law Society is to assist staff to weigh up whether an individual with whom they are concerned may be deprived of their liberty. It explains the relevant law including...

Following the Supreme Court Judgement the Department of Health has produced a number of letters, outlining what the ruling means and providing updates on developments in the area 28 th March 2014...

This guidance written by the Chief coroner considers whether the death of someone under a deprivation of liberty authorisation should be reported to the coroner. It reaches the following conclusion:...

This CIH briefing gives useful tips and examples of practice for housing professionals that are in contact with adults with care and support needs, who are experiencing or are at risk of abuse and neglect

From the 7th July to the 2nd November 2015, the Law Commission invited responses to its consultation paper "Mental Capacity and Deprivation of Liberty". In addition to raising awareness of the consultation...

The Law Commission's consultation on mental capacity and deprivation of liberty closes on the Monday, 2 November 2015. The proposals are relevant to the housing sector, particularly those who provide...

Are you ready to respond? Law Commission proposals for those deprived of their liberty

Written by Sue Garwood, Housing LIN dementia and safeguarding lead. This week, the Law Commission published its proposals for replacement legislation to safeguard people deprived of their liberty...

Legal briefing on deprivation of liberty

The Cheshire West judgement made by the Supreme Court in March 2014 defined deprivation of liberty in a way that makes it much more likely than before to apply to people living in housing with care and...

Any the wiser? Deprivation of liberty in housing

In this new Housing LIN Viewpoint no 72, Sue Garwood shares her current understanding of the position with regard to depriving someone of their liberty in a housing setting if they lack the mental capacity...

Deprivation of liberty: a practical guide

The primary focus of this guide by the Law Society is to assist staff to weigh up whether an individual with whom they are concerned may be deprived of their liberty. It explains the relevant law including...

Deprivation of liberty in housing settings

This presentation by Sue Garwood outlines the position in relation to deprivation of liberty in housing settings and sets out some of the responsibilities of housing sector staff and related issues.

A range of housing sector professionals met with the Law Commission to discuss issues of deprivation of liberty in housing settings. These notes of the meeting serve to raise awareness of some of the...

Deprivation of Liberty in Supported Housing

This Housing LIN Viewpoint no 65 is intended to stimulate consideration and debate on two separate, but related issues: Firstly, with the new and revised and more encompassing definition of "deprivation...

The Court of Protection has revised its procedures to streamline applications to authorise deprivations of liberty in "community settings". This new procedure will allow appropriate cases (e.g. where...

“We are delighted at Golden Lane Housing to be sponsoring these Learning Disability pages. Housing LIN provide invaluable commentary and advice to support the delivery, development and improvement of housing for people with a learning disability. Golden Lane Housing’s vision is a world where everyone with a learning disability has opportunities to access good quality housing that meets their needs. We have been working for over 20 years to provide person centred housing solutions and influence positive change across the UK. Our partnership builds on a long running relationship, and we are excited in working together to share and encourage innovation and good practice across the sector.”