Housing LIN > Blogs > On the Move in Later Life: What can the English Housing Survey tell us?

Back in July 2019 data from the most recent round of the English Housing Survey (EHS) were released. This survey is commissioned by the Ministry of Housing, Communities and Local Government and is carried out annually. Some of my own recent work has been focused on older homebuyers (opens new window) and so I was keen to explore what the EHS data could tell us about relocating and later life.

Since the EHS is a survey of households, rather than individuals, some of the data are provided in relation to the ‘household reference person’ (HRP). This is the person in whose name the dwelling is owned or rented and therefore the individual with responsibility for the accommodation.[1] We might think of them as the ‘lead householder’.

The EHS provides data on ‘recent movers’. These are households who have relocated in the year previous to the survey. The most recently published data are for 2017/18 and confirm what we might have expected based on previous research (opens new window) – households with an older HRP[2] are less likely to have moved recently (Figure 1).

"We need to consider private renting in later life"Figure 1 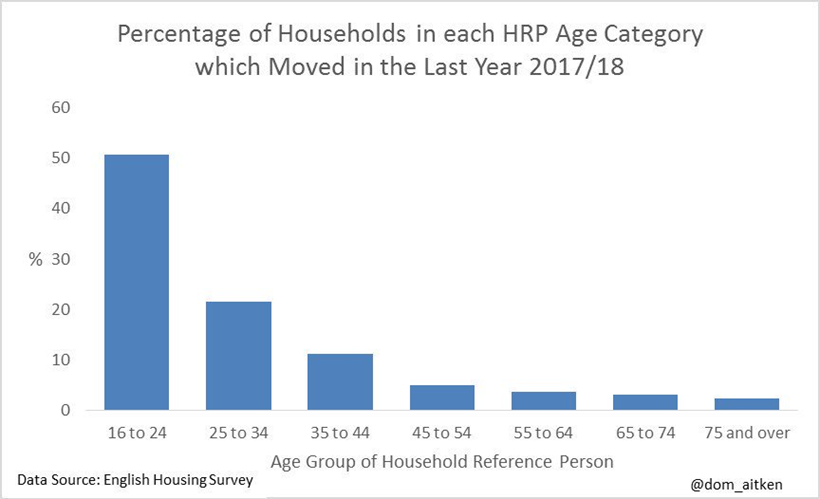 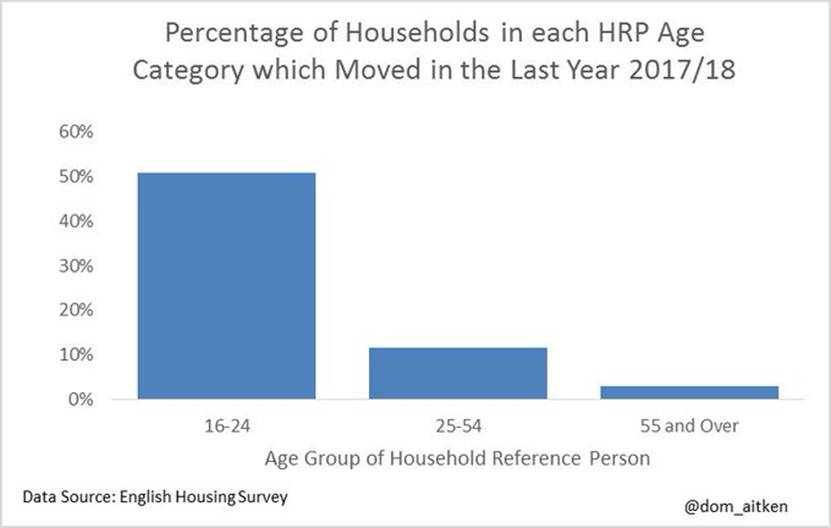 This 3% figure isn’t new. We can see that around the time of the financial crisis and its aftermath the proportion was lower, but since then it’s been fairly static at around 3% (Figure 3). 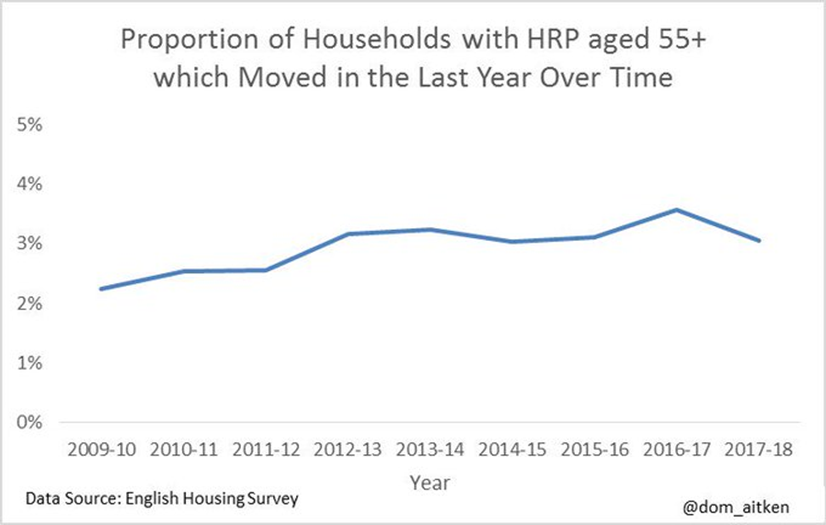 So far, I’ve considered households and their likelihood of having moved recently by age of the HRP, but it’s also interesting to consider this from the reverse perspective. What do we know about all the households who moved in the year prior to the survey?

The 2017-18 EHS data tell us that 9% of all households moved in the year before the survey. Within this group, the vast majority had an HRP under 55, with just 15.5% aged 55 or over. We can go even further and to look at what we know about these moving households which have an older HRP. The data provide a (current) tenure breakdown. Around half of these recently moved households with an older HRP are owner occupiers, but 34% are private renters (Figure 4). 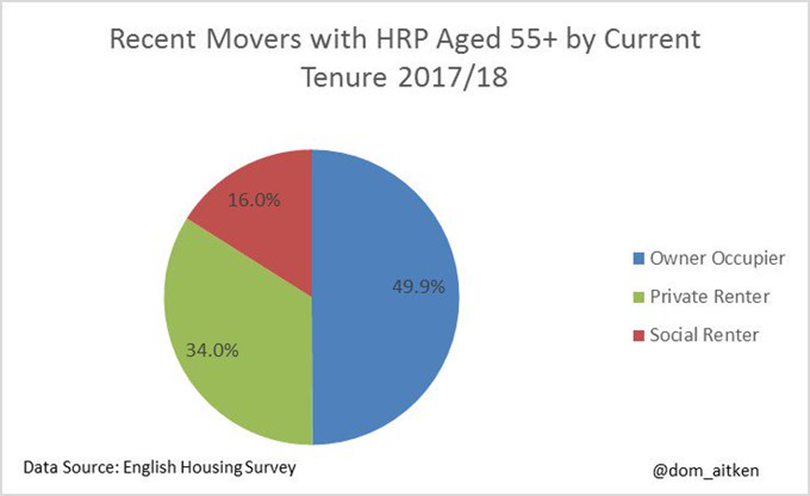 The data also allow us to look at how this has changed over time. Generally, the proportion of older HRPs who are buyers has stayed static but there does appear to be a trend developing for the private rented sector (PRS), with increasing proportions in this tenure (Figure 5). This will include households which have moved into the PRS from another tenure as well as moves within the PRS. This is being offset by a reduction in the socially rented sector. 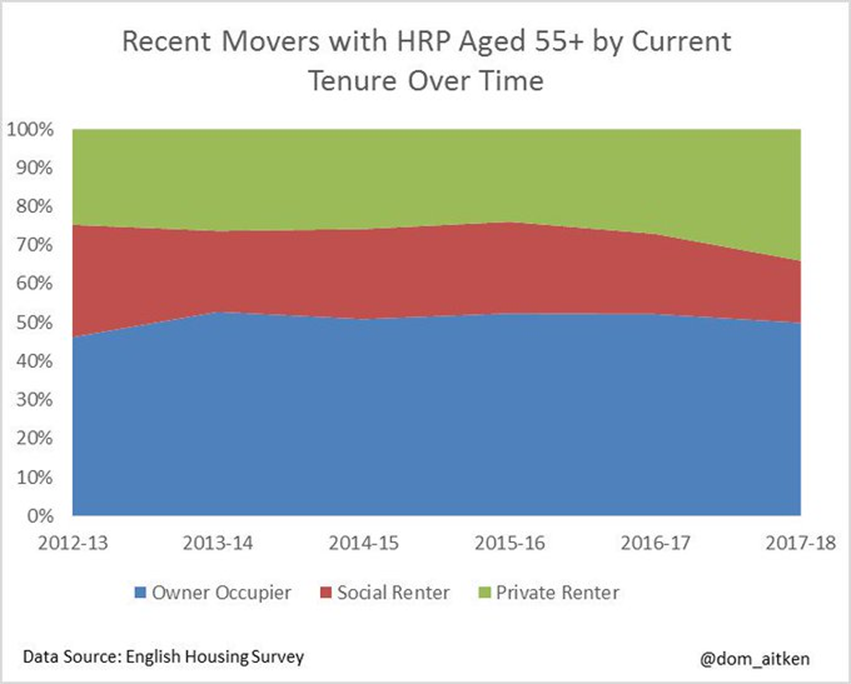 Finally, we can reverse this again and focus on the individual tenure sectors. Of the owner occupier households who have recently moved, 26% have an HRP of 55+. As we might expect this hasn’t really changed in recent years, apart from a blip for 2016/17 (Figure 6). 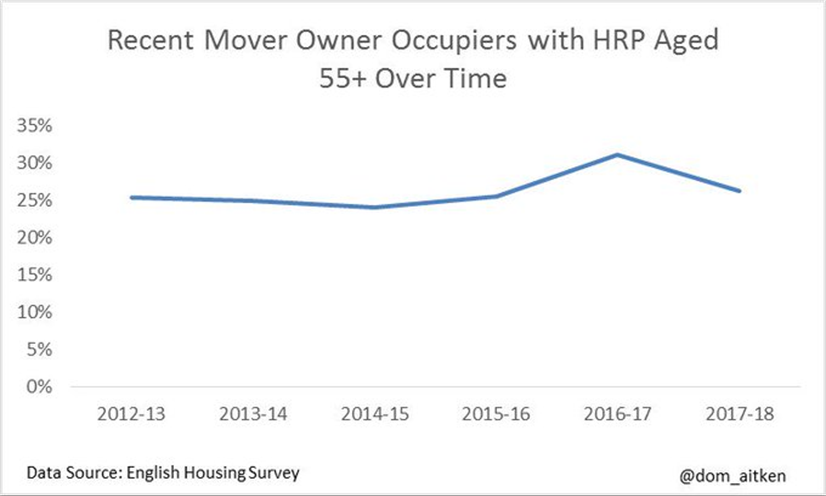 The proportion of recently moved privately renting households which have an HRP aged 55+ is far smaller, at just 8.9%. However, this proportion has grown substantially in recent years (Figure 7). 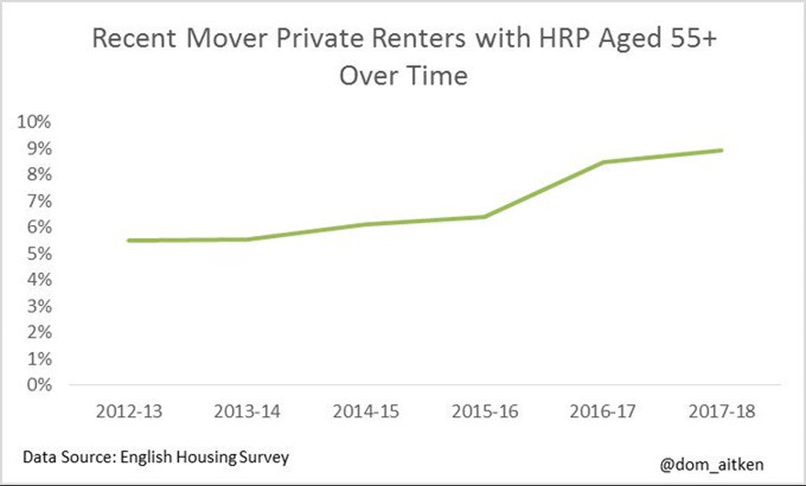 So, what can we take from these data? First, households led by an older person are very unlikely to have moved in the last year. Second, if we’re talking about recently moved households with an older lead householder, we’re increasingly talking about private renters, although owner occupiers continue to dominate. Third, among recently moved owner occupiers just over a quarter are led by someone aged 55 or over - a sizeable share of the market. Finally, among recently moved private renting households, the proportion with a lead householder aged 55 and over, while still small, has increased by over 60% in just five years. This serves to underline the call made in the recently published HAPPI report from the All-Party Parliamentary Group on Housing and Care for Older People on the urgent need to consider private renting in later life.

All the data analysed in this blog post is from Tables FA4121 and FA4141 of the EHS.

[1] Where there are joint owners or tenants, the HRP is the person with the highest income; where incomes are equal the HRP is the older individual. It is argued that this approach is more likely to result in an HRP which characterises the household’s social and economic position more closely (MHCLG, 2019, p.48). (opens new window)

[2] It’s worth caveating here that there will of course be some households where the oldest person is not the HRP, so these data do not tell us about ‘older movers’ in general.