Housing cooperatives generally are a great success story. People running their own communities, making the key decisions, generating social capital and cohesion, setting standards for services are just a few of the things that work better.

A decade ago the Commission on Cooperative and Mutual Housing in its report set out the advantages: better performance (rent arrears and void levels were lower and satisfaction levels were higher than elsewhere in the affordable housing sector); they built real communities where people interacted and lived more engaged lives; they gave power to the people rather than the housing being managed by officials, more tenants were in work and environmental standards were higher (See Commission on Co-operative and Mutual Housing, Chapter 5, Bringing Democracy Home, 2009).

Perhaps one of the day to day problems is the amount of time each co-operator can give to running the co-operative. People in work can give less time and energy and sometimes that can lead to just a small number of people running a co-operative. That is not such a problem within a retirement community, since people have the time to invest and run a cooperative.

Breedon Gardens Housing Co-operative in Redditch is a case in point. Originally the Co-operative was set up to run and manage some 20 plus bungalows for older people. The Co-operative’s remit widened a few years later when a further scheme of general family housing was built nearby and it made sense that the new scheme was incorporated into Breedon Gardens. As such the Co-operative has been a great success. It has been such a success because of the amount of time, energy and passion a group of older people have put into creating Breedon Gardens as a great community and a great place to live. But it’s also a success story that is based upon skill, experience, knowledge and ingenuity but overall a strong sense of belonging and comradeship.

The residents have repeatedly made ethical decisions about the contractors they chose which do the grounds maintenance and repairs. Maintenance has been important to the residents throughout the history of the Co-operative and they provide an excellent service through a mixture of self-help and a procurement process that has focussed on small local contractors and charities providing supported employment. Response times for emergencies are just 26 minutes.

It has worked right from the beginning. Redditch Council working with Accord pre-selected prospective tenants for the original and the later schemes. This was so that tenants could work with community architects to design the scheme before they moved in, making all the key decisions about what they wanted to create as a community. They continued with their involvement right the way through the building process, checking that things were right and ensuring that what they dreamed of was being built in practice. This meant that the community was established, relationships formed, from the outset even before people lives in their homes.

Right the way through there was a great sense of expectancy and excitement, designing the schemes, making decisions about specifications, thinking through where everyone would live and who their neighbours would be, watching the schemes being built and then of course moving in and running the co-operatives together. And such emotions still exist today some 12 years on from the schemes being built. 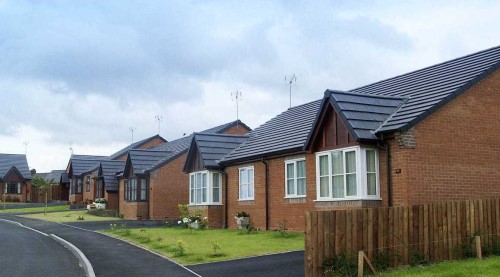 The Breedon Gardens community residents support each other, they go on trips, they hold events, they look after each other. There is therefore less reliance upon the NHS and care services, mutual support tends to work better, some residents say like it did in the old days when community was stronger and more important than perhaps is now the case in modern Britain. Breedon Gardens has become an incredibly special place because of the efforts of the older people who are the residents there. Instead of older people being written off they have become the engine of the community in Breedon Gardens, the very heart and soul of the place.

What can we learn?

Clearly Breedon Gardens is a success story on so many levels. But there are very few Breedon Gardens out there. These projects with the engagement d leadership of older people who have the time, skill, energy and experience to run things need to be replicated across the UK. They result in lower levels of dependency, greater independence and with that less cost to the public purse, since people can live independent and healthier lives for longer. We should have a Breedon Gardens in every community up and down the country, enabling older people to run things themselves, take charge of their lives and provide mutual support in a thriving, active and engaging way. So what can we do to create more places like this:

Don’t write older people off – society should accept that older people have dreams, skills, energy and experience which can work to run communities and create great places to liveOf course co-operatives do not suit everyone but where residents want greater involvement and have the time, the approach works well for people giving more meaning and greater connections to their lives (for more information on the technicalities of housing co-operatives, see C. Handy and J. Alder, Housing Associations: a Legal Handbook, fifth edition, 2019, Legal Action Group).