What follows opens a window into a senior cohousing community, how it has fared during the past months of COVID-19 and what it can offer as a way of living for older people at such a testing time. It is a narrative about a group of individuals in North London sharing their strengths and organising an impressively creative and collective response to lessen the impact of lockdown, both practically and emotionally. It also tells of the discomfort of knuckling down to the edicts of the group when an individual might make a different choice.

At the 'New Ground’ Older Women's Cohousing Community in High Barnet, this has been a testing and anxious time, as for so many older people confined to their homes and cut off from the outside world and from physical contact with loved ones. Quite a few OWCH (Older Women’s Co-Housing) members are covered by the government's lockdown injunctions, although the challenge that age does not equate to health status is as relevant here as elsewhere.

For a real living community of close neighbours it has been a strange experience to become a virtual one overnight, communicating by Zoom and What’sApp, email and phone. Women who know each other well and live side by side carefully avoid each other, maintain a social distance and put certain areas and behaviours out of bounds. A building designed to enhance social interaction, has now to be managed for separation. Handrails and handles are regularly sanitised. External visitors are prohibited. All the communal meals and social gatherings which are a hallmark of cohousing are in abeyance to minimise risk. Underlying this transformation is a firm base of shared values and agreed policies, all of which the group worked on in the good times. What makes this special as a way of living is that it has enabled people to agree boundaries and set rules for the greater good - much more difficult to achieve among neighbours who are relative strangers. Other cohousing communities around the country are experiencing similar challenges.

Have there been positive aspects of the group’s life under lockdown? Undoubtedly. This group of women chose to form a cohousing community precisely to safeguard themselves against the isolation that older people living alone can experience. Individual members record an inevitable roller coaster of emotions in the face of the unknowns and losses of COVID-19, but are also keenly aware of the advantages of living at ‘New Ground’.  “if I didn’t live here?’ says Charlotte, ‘I’d be so unhappy! I would be living on the 2nd floor of a block of flats with no balcony, no lift, and where I didn’t know my neighbours. I’ve been the happiest in my life living here, creating a life that suited me.’  Vivien comments: ‘We are so lucky to be here. If this had to happen - we already have got to know and care about each other.’ Shirley: ‘It’s what we dreamt of - and so much more’.

Since lockdown began in the latter half of March, most OWCH members have got to grips quite quickly with What’sApp conversations and exchanges; those less happy with the tech, have settled for Round Robin emails and phone calls and face to face communications at a distance. Preventive measures proposed by the management committee were aired and discussed for community agreement via Zoom. With one or two technical hitches and some absentees, the group has managed to adjust reasonably well to this new way of communicating and holding its meetings. The worry is ‘how long will this have to last?'

In practical terms, the group, because it is a group, has been able to organise supplies.  A small number of women in their 50s and 60s, who do go out, quickly established themselves as casual shoppers for those ‘under house arrest’,  as someone put it, to fetch prescriptions, post letters (very necessary in a hard of hearing and pre-digital age-group) and run errands. A ‘shielded’ OWCHer has organised a weekly food and provisions delivery for the whole community; another member has sourced bulk vegetable deliveries; yet another orders bread and cakes in from a local bakery. As someone described it, the group’s common room is now a regular Farmer’s Market where women come (in spaced two’s) to buy.

One example will give an idea of the practical help spontaneously on tap from neighbours in OWCH. Imagine being without your glasses and stuck in lockdown!  A member emailed around an urgent plea: ‘An arm from my glasses has just come off. Does anyone have a tiny screw driver and could they fix this for me. I don’t have one and even if I did I couldn’t see to fix them!’ Within half an hour a screw driver arrived from one neighbour and a pair of eyes from another.

Substitute communications have made such a difference. OWCH’s new What’sApp account is a treasury of helpful information, photographs, jokes and funny and serious YouTube clips - the latter assiduously researched by two younger members.  Round Robin emails circulate at irregular intervals, with photographs documenting beautiful trees or clusters of ducklings seen on people’s walks - the non-resident members of OWCH scattered around London also contribute to these. Such communications have become an important source of comfort and entertainment, not just to those living at ‘New Ground’, but, I can say from a personal perspective, for non-resident members too.

Within ‘New Ground’, a generous shared outside space has enabled personal forms of interaction, blessed by recent good weather. How different this would have been in the winter, does not bear thinking about - although that possibility may yet have to be anticipated. OWCH’s large garden is maintained by the garden team, and a ‘community pond’ is under development. A variety of new, distanced activities have sprung up - the daily weights session in the carpark, a shared meditation hour every Tuesday night, a community quiz, a birthday party, a picnic or fish and chip suppers out on the lawn with everyone seated at 2m intervals. Individuals have initiated other diversionary activities such as a creative writing group by Zoom; small groups meet at 2m for theatre appreciation, current affairs, etc. New, online courses have been taken up. 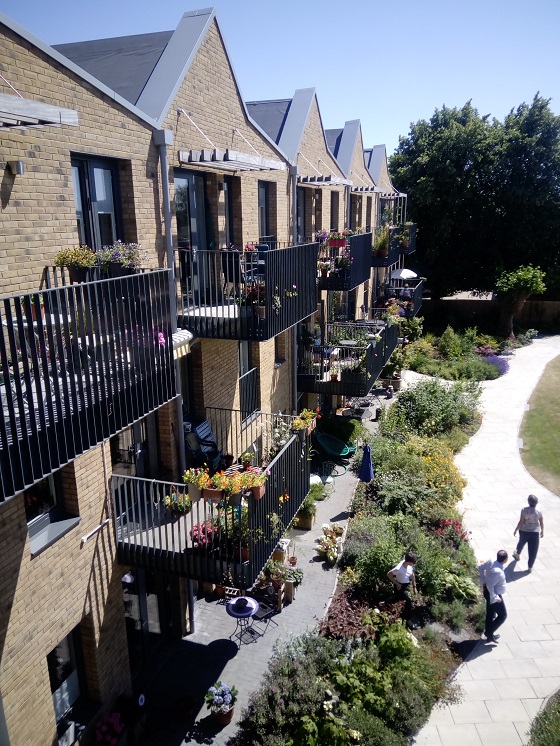 Local volunteering is strong in the OWCH group but necessarily constrained by lockdown. Various individuals have found ways to circumvent isolation, reaching out by telephone to isolated older people via the local church or the Association of Jewish Refugees; helping to organise pizza deliveries and small gift bags to overstressed key workers in local hospitals. Two OWCH members are collaborating in a ‘zoom class room’  by global story telling with groups of four children each in Sierra Leone, Haiti, Gambia and the UK, organised by an OWCH member who heads a small international aid charity.

Finally, at the end of this tale of resilience and adaptability, evidence of the joy that can emerge from adversity. OWCH member, Janet, who is deaf and requires face-to-face communication, particularly with her autistic son, now exchanges letters with him. She comments: ‘I try to imagine how it would be in my previous home where the isolation would be total. As I am very happy to tell everyone, I am so lucky to be here. I would love you to mention about my son. What an amazing happening to come out of this lockdown. I have learnt so much about Mike who sometimes has difficulties expressing himself verbally. He is informative, humorous and loving towards me which I find so heart warming. I have laughed and cried at his letters and I hope that even when this is over we can still carry this on.’

A recent Zoom conference report on Community Led Housing observed: ‘There will be lessons to be learned from cohousing groups which have come through the current epidemic, about how to balance cohousing principles based on social interaction and intentional community, with a need for social distancing.’ No-one at ‘New Ground’ cohousing would pretend that this is easy; they are still feeling their way and are concerned about the future. Eventually, particularly for OWCH’s wide age group, considerations of relative risk will need deeper exploration and balancing against important issues of emotional and mental health. For now, the intentional community that OWCH planned and created is working very well.