I applied for the Churchill Fellowship under the category of New Approaches to Social and Affordable Housing in 2017.

As an NHS commissioner and co-chair of the Housing LIN Steering Group for the East of England, I am interested in the needs and aspirations of older people, living in communities, in later life. My Fellowship took me to the Netherlands and Denmark to study intergenerational, communal and co-housing models and my Fellowship report can be found here: Supported Independent Living: Communal and intergenerational living in the Netherlands and Denmark.

With the current APPG on Social Integration (opens new window) looking at breaking down the barriers to intergration, and in particular on intergeneration housing, this study is particularly pertinent to the United Kingdom, as the challenge to support older people in good quality housing that promotes care, wellbeing and alleviates loneliness has been well documented by the government. The NHS’s recently published Long Term Plan also sets out how care models will be designed to meet communities’ needs, with local responses and infrastructure to support all of its residents. This has an implication for housing and accommodation to be part of that infrastructure.

For older people’s housing, there are similar issues to the UK regarding loneliness, under-occupancy and supporting later life choices. However, there is also a strong message of self-responsibility and support to make those important choices, underpinned by legislation which enables care and support to fit around the person’s needs.

Humanitas is a residential and nursing home in the Netherlands that provides accommodation and care to 160 residents and there are also respite rooms. Six students live amongst the residents. Sættedammen, in Denmark, is a community of intergenerational residents living within a co-housing environment. There are 70 people in the community. De Hogeweyk, in the Netherlands, is a residential village which specialises in the care of 150 older people with dementia. 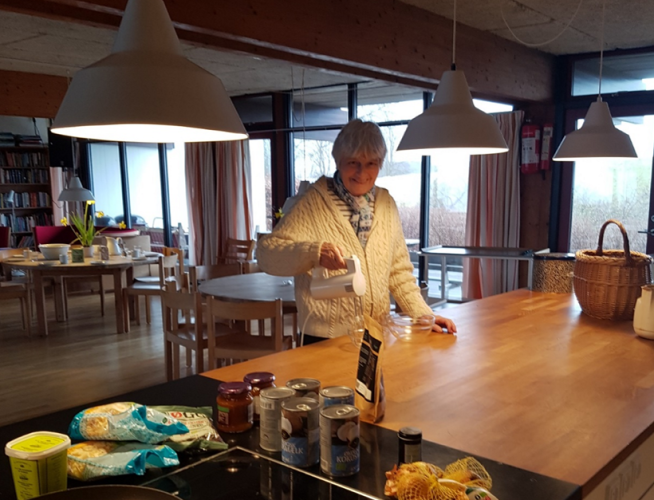 Above: Hygge Time at Sættedammen, Denmark

“Yes, this works. People are normal human beings and the combination of different people makes a community.”

Whilst the communal life could be all consuming, this was also deemed to be a positive, as there was lots on offer and much to give to the communal way of life. There were clear benefits for the sandwiched age groups at Sættedammen – for parents of young children, having extra grandparents to support childcare was invaluable. There was also support in De Hogeweyk for everyday tasks, like meal preparation and laundry and encouragement of people with dementia to undertake leisure activities.

“The impact of Humanitas is that it is creating the next generation of being a good neighbour. The take aways are about values. A ten minute chat is valued and an arrangement is made.”

Humanitas may be classified as an ongoing social experiment, but at the heart of the facility is care, support and respect of older people and adults of all ages. I was left with a sense that it’s the student residents who will gain invaluable and immeasurable benefits into their adulthood.