Body Image is the theme for this years, Mental Health Awareness week. 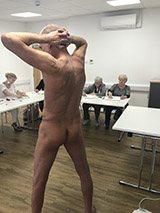 The Mental Health Foundation works across the life course. Concerns about body image and appearance, while often associated with younger people, are not exclusive to being young. Though our appearance and our relationship with our bodies change as we age, we do not stop valuing our bodies, and in later life adults are still concerned about body image. Facilitating a life class seemed an interesting and direct way to explore issues of body image with people in later life and those who work with them. As Programmes Manager for Later Life & Empowerment who still attempts to be an artist some of the time, the chance to look directly at a naked body, in the flesh and reflect on that experience creatively was very exciting. The launch of the Standing Together Cymru project was an excellent opportunity to do this.

The Standing Together London Project (2015-18) facilitated self-help peer groups in both retirement and extra care settings, to improve mental health and build connections between tenants to help to address loneliness, one of the biggest inequalities facing people as they age.

Standing Together Cymru (2018-21) is a three year Welsh Big Lottery funded project and  builds on this work in South East  Wales, We are working with four partners who provide later life housing: United Welsh, Derwen Cymru, Newport City Homes and Melin Homes across South East Wales, all of whom have been involved in the project from the fund raising stage. The project will establish 30 weekly peer support groups in retirement and extra care housing schemes. We will be running the groups for six months and aim to see the groups sustained by volunteers and housing staff. We use our decade of peer group expertise to enable deeper conversations between people and have fun while also reflecting on change and loss, to improve wellbeing. By 2021 over 1000 people in England & Wales will have taken part on Standing Together groups.

Initially people were a little reluctant to sign up to the class, but it ended up being oversubscribed. It’s always strange to be faced with a naked body to draw, though quickly it becomes quite normal. People made several quick drawings from standing poses and then a longer drawing from a seated pose. People drew in charcoal because it’s versatile and you can make bolder images. There was general surprise about what people drew from with their eyes shut!  "I’m 80, I haven’t drawn since I was 15. Never life drawing. It’s been a very interesting class."

"The session did make me examine my own preconceptions about body image & ageing. I was expecting to draw someone with lots of wrinkles. I can’t believe that our model is 77. He didn’t look it!" - Member of Staff. 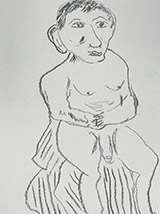 So, what do you expect a 77 man to look like? We all have stereotypes, but our model Bruce is someone who has always played sport and now goes to the gym regularly. One participant said, "For your age you’re a fine figure of a man." Bruce’s body enables him to earn an income as a model. He is a great role model for being confident about body image in later life.

We talked about whether how you feel about your body impacts on your mental health? The general feeling was that it does. In a culture where the imagery that surrounds us is mainly ageist portraying young, slim, airbrushed images, it can be hard to be visible in later life.

One participant said - "We don’t need to conform to the stereotype view of a ‘nana’. It’s still possible to be in good shape and attractive in later life." 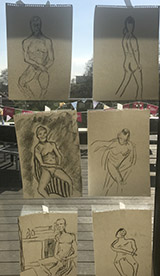 Some of the drawings were left on display in the communal area of the later life housing scheme, where the Standing Together Cymru Launch took place. The next day a relative complained feeling that the images were inappropriate, and the drawings were taken down. To be faced with life drawings is not going to be everyone’s cup of tea. The life class itself led to stimulating conversations and the chance to talk about body image in later life in a positive and non-discriminating way.

To end on a personal note. 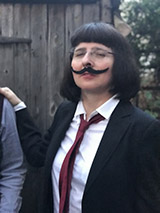 As I woman in my early fifities who comes under our categorization as a person in later life, I recently went to a fancy dress party as the artist, Salvador Dali. I don’t think I have ever felt more visible while travelling on public transport from north to south London. If you want to be more visible wearing a moustache, it is very liberating!