I recently had the pleasure of speaking at a national property conference about the future of retirement living, chaired by the Housing LIN’s Jeremy Porteus. It’s a topic we’re exploring in some detail at Pozzoni, so it was fascinating to hear from leading senior living operators, financiers and developers, about their differing visions for the future.

Although our approaches may differ, there was clear consensus on the rapidly growing demand for tailored environments where people can continue to make the most of life, long into retirement.

Our population is ageing at an unprecedented rate. The majority of population growth (57%) over the next ten years is expected to be in the over-75 age group, outstripping projections made as recently as 2014. There are already more than 6.5 million households over the age of 65 in England, while the Resolution Foundation predicts that one in four of us will be over 65 by 2041.

Not only is the country ageing rapidly, but we are also becoming increasingly focused in urban locations. In 2016, the UK urban population was reported at more than 82%, with average ages in some urban communities dropping – often due to localised spikes in student populations.

But should our cities continue to be designed almost exclusively with younger generations in mind? We believe not. Urban environments have huge potential to provide a truly fulfilling mix of opportunities for older people too, enabling them to make a fuller contribution to society and the economy – be that as workers, entrepreneurs, volunteers or consumers – and retain their independence for longer.

While we understand that urban living is unlikely to suit everyone in later life, there’s undoubtedly enough demand to explore some new and creative living models; but we should always be thinking beyond the bricks and mortar of new retirement developments.

All of Pozzoni’s work in the senior living arena is underpinned by a commitment to building resilient communities. We strongly believe that the most successful communities are those that challenge society’s relationship with ageing – combining different age groups wherever possible to encourage productive shared experiences.

At our Village 135 housing & extra care development, designed for Wythenshawe Community Housing Group, we’ve tried to encourage these valuable intergenerational interactions by introducing an 5,000 sqft hub as a new focal point for the local community. 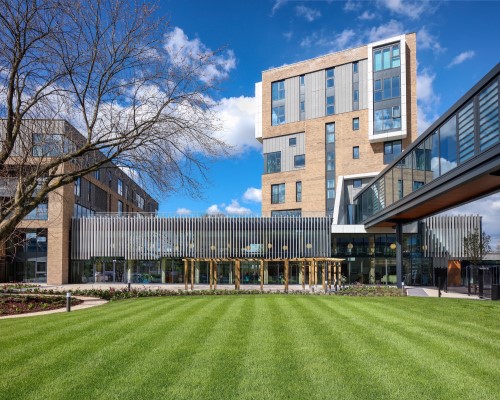 The hub is used almost as much by the college students based next-door as the senior residents themselves, encouraging unlikely social interactions and helping tackle isolation in individuals. In creating a new community, we can deliver a happy, healthy ageing experience for residents.

With the number of over 85s in the UK expected to double in the next 25 years, it’s important to consider how a person’s changing care requirements can be factored into a building’s design.

Working with our client Belong, we have developed a care village model that accommodates ‘ageing in place’, with both apartments and care households within the same building. Many of these developments are in urban settings, with city-centre care available at our development with Belong in Chester as well as at Wirral Waters – a major mixed-use regeneration scheme by Peel in Birkenhead. 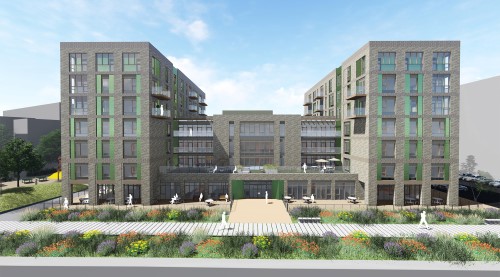 We consider ourselves very fortunate to have an operational base in Greater Manchester, which the World Health Organisation has recognised as the first age-friendly city-region in UK. As members of Greater Manchester Combined Authority’s “Ageing Hub”, Pozzoni is working with public and private sector partners, including the Manchester School of Architecture, on a strategic response to the opportunities and challenges presented by an ageing population.

Over the past six months, we have been leveraging these partnerships, along with our existing client base, to develop a new vision for urban living; one that brings together a range of age groups and local support and leisure services, to deliver lasting social benefits with older people at its heart.

In recognition of some ground-breaking schemes from around the world, our intergenerational community concept presents a layered urban community, focused around a hub for social, wellbeing and economic interaction. Residents of all housing types have access to a wealth of shared facilities; including market and event spaces, a library, as well as typical city centre amenities. 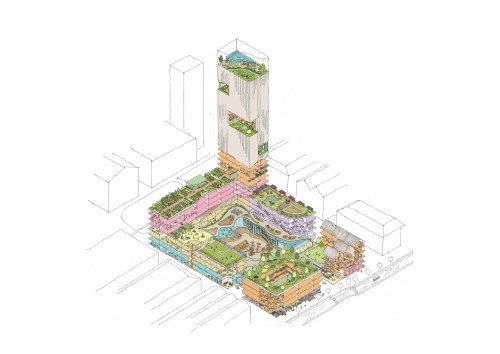 Alongside the diverse housing options – including versatile town houses, bustling co-living environments, extra care housing and a care home – are a broad range of facilities and amenities suited to all stages of life. A school, commercial space, co-working offices, open spaces and fitness & wellbeing facilities are equally accessible to those living within or outside the development.

Although this model has been developed initially with Greater Manchester in mind, it is designed to be transferrable to any UK urban setting. We are excited to be exploring these ideas even further, with carefully-chosen partners representing each ‘component’ of the development; including providers of general needs housing, leisure, education, and residential care.

Through more advanced modelling and multi-stakeholder working, we hope to stimulate further debate about how our ageing population can become an integral, essential and highly-valued ingredient of our urban communities.

Overall, we want the future to offer environments where families, young couples and older people can not only co-exist – but thrive and develop together.

Nigel - I have just returned from the LGA social care conference where Jeremy et al spoke with passion and commitment to integrate thinking on housing with social care. Your blog again highlights with great examples the need to build intergenerational communities and as importantly wow with style and design.

If we all believe that the look and feel of home is as important as all the functionality then we can make a difference across the country.