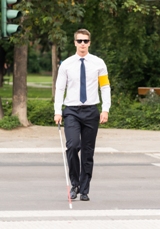 ‘The only way I can explain it, it’s like being picked up and put in a whole different country. For me, when you’re visually impaired and you move, you’ve got to learn everything again.’

‘The house I lived in, the flat I found, you’re sort of moving in with two people who didn’t know me, didn’t really know my sight condition so it’s getting them to understand it and then getting used to a new place, there was a lot going on there.’

‘The hall was quite narrow and I kept misjudging things. I have light perception and I can kind of see movement. One of the walls had black wallpaper. Apparently it’s trendy to have black wallpaper and it drives me nuts. When you’re in rented accommodation you can’t change that.’

‘We couldn’t do the practical things that he was suggesting we do, so that was quite awkward. When the boiler broke we couldn’t check some of the visual things, so we had to call out an engineer. We couldn’t get the estate agent to reimburse it because he said that we shouldn’t have called out an engineer.’

‘We had problems with the letting agency who said that I couldn’t have my guide dog. They made us pay extra because of the guide dog. We didn’t have much choice because we were pretty much homeless after having moved out of the previous house.’

‘Even if you tell them that it’s an assistance dog, they come up with another excuse to not allow you to have the property.’

‘The garden wasn’t blind friendly at all. It was nightmarish, very uneven.’

‘I own my own home so I’ve been able to afford to have it the way I want it. Any decision about the house is my own and therefore I can have whatever colours I like, have whatever furniture I want, and I can make it as light as I want it to be.’

‘If you have a physical disability, they kind of think okay you need this kind of property to get in and out, so therefore you’re probably going to have a house or a bungalow. If you’ve got visual impairment, they kind of have no hesitation in putting you into a fourth or sixth floor flat.’ 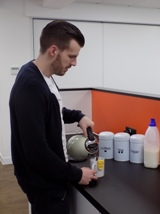 lt that the housing association were very good because they helped me get near to my mum because of my visual problem so they really helped us, me and my sister, you know moving and getting the right area, they put us on the ground floor because they knew if we were on top, there’d be steps and walls.’

‘I think the fact that you can get support throughout the day, between the hours of nine and five there’s staff and reception. That’s quite good because it makes you feel a bit safer.’

‘I think for me, because I’m quite young, I’m 19, I find it a bit difficult that there are so many older people here. Just in terms of, it would be nice to socialise a bit more, do a bit more fun stuff.’

‘To be honest I’ve never had a full time job. The statistics of visually impaired people of working age who are unemployed are 66% of us. I’m unfortunately one of them. I’d like to be in employment in the future but my skills probably aren’t as up to date as they could be.’

‘I have very high powered light bulbs in my flat, the bulb I’ve got is in a cool white colour so it’s quite high on the UV spectrum and it generates the equivalent of 175 watts so it’s industrially bright.’

‘As we redecorate we do think about contrast so although we do it in a nice way there is still quite good contrast, so an example would be our bathroom downstairs.’

‘They’ve done things like different patterns on the floor so you know when you get to the edge of the steps, and large print for fire exits.’