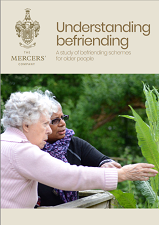 The Mercers’ Company undertook an evaluation of the grants made in support of befriending services, particularly since this method of delivery has increased as a result of the COVID-19 pandemic.

While befriending could be provided to anyone experiencing or at risk of loneliness and/social isolation, in practice it’s usually offered to people who would be unable to access other forms of support making social connections. As such it’s often the last line of human contact.

Moving forward, the report recommends that organisations which provide befriending should:

Funders and others involved in supporting befriending organisations can provide resources, help and support to enable them to take these steps.