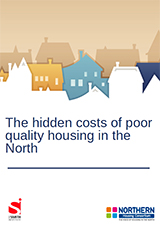 Sub-standard private housing is a major problem in the North, yet the issue is overlooked and rarely discussed. The problem affects all three regions and is a particularly urgent concern for many older homeowners. Nearly 1m owner-occupied homes in the North now fail to meet the decent homes standard in addition to 354,000 private rented homes.

This report was commissioned by the NHC and written by the Smith Institute, an independent public policy think tank. It highlights the scale of the problem and the increased health impacts of those living in homes that are not fit for purpose.

The problem is largely hidden and has been made worse by the economic downturn and a national policy bias towards new build in high demand (mainly Southern) areas. Making all homes in the North decent would be a significant cost, though there is strong evidence that this intervention would be offset against reduced care and health costs. The government could start to address this challenge through increased home improvement grants under a new Decent Private Homes programme and new devolution housing deals, part funded by the savings gained from housing improvements and a creative approach to help people to stay in improved homes or be given the choice to move to a property they are confident better suits their needs.

Opening up the debate on the costs and benefits of poor condition homes in the North is an important first step in developing such an agenda for change.