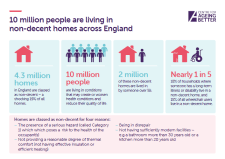 According to new research by the Centre for Ageing Better and Care & Repair England an estimated 10 million people across England will spend this Christmas in a home classed as ‘non-decent’.

Ahead of a new report on the scale of non-decent housing, to be published next year, their analysis finds that there are 4.3 million non-decent homes in England, almost half of which are lived in by someone over the age of 55. 15% of all wheelchair users live in a non-decent home.