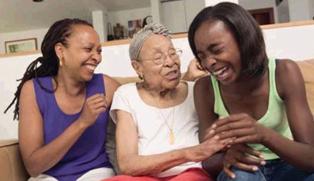 Following the death of her husband Moira had been living in sheltered housing in a small flat on the ground floor. She started wandering out of the back door into a storage area and often locked herself out. A personal alarm was provided by social services and the call centre would contact Moira's daughter when there were calls. Over time the calls got more frequent and during an extended stay with her daughter it became clear that Moira had memory and continence problems that the family was unaware of, as her husband had helped her manage.

Moira had a spell of respite care in a residential home and when she returned to the flat she was less able to do everyday things like preparing meals and keeping herself clean and was wandering outside and getting lost. Her local Social Services suggested a local extra care housing scheme and Moira moved in soon after. Moira's daughter says 'if Mum had gone into a care home I think she would probably have died by now as she needs a reason for doing things and having her own flat gives her that'.

Moira has made friends with another resident called Maggie and they like to sit together when they go for lunch. Moira can get confused in the morning and staff always check on her and provide help and encouragement to get up and dressed if she needs it.