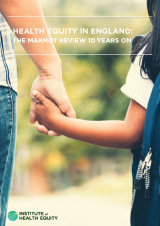 The updated review details changes to life expectancy and further changes to health inequalities since 2010, as well as a breakdown of the social determinants of health in England.

The report also looks at the effect of housing conditions and its affordability on health. Some central findings for this are: exposure to poor housing conditions such as cold, damp, mould and noise is strongly linked with poor physical and mental health; lack of housing affordability creates excess mental health distress - with the cuts in housing benefit from 2011 being linked with higher mental health problems for the people affected; the percentage of non-decent homes across all tenure types has been decreasing from 2010 onward; and that the percentage of overcrowded households, with too many people living in the house relative to the number of rooms available, has been growing for social renters from 2013 onward. It concludes that there is need for whole-of-government action to tackle the causes of the health inequalities highlighted in the report.