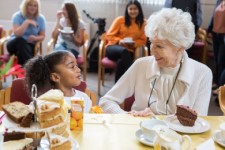 This academic book published by Routledge includes a chapter feature the work of St Monica’s Trust and their involvement at their Cote Lane Retirement Village in Bristol on Channel Four’s series shown in 2017, ‘Old People’s Homes for 4 Year Olds’.

The series saw eleven St Monica Trust residents brought together with ten preschool children, was aired over two nights attracting widespread critical acclaim and a peak audience of 2.2 million viewers. The series captured the transformative power that simply being around the children had for the older people, resulting in some amazing improvements in the residents’ mental and physical health.

The book describes findings from the data analysis of the mood and physiological functioning of the older participants, as well as fascinating insights from the follow-up interviews we conducted sixteen months on from the original experiment. It is a valuable resource for practitioners and leaders in early childhood education and care and those working in primary schools, as well as professionals caring for older adults, and those working in community development. It provides a comprehensive background to intergenerational learning, along with tools and resources to help develop and improve intergenerational practice.