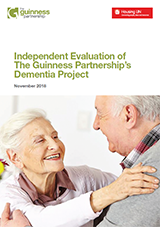 Dementia presents a huge challenge to society, both now and increasingly in the future. There are currently
850,000 people in the UK with dementia. Dementia costs the UK economy £17 billion a year and, in the next 30 years, the number of people with dementia in the UK will double to 1.7 million, with the costs trebling to over £70 billion a year.

Two-thirds of people with dementia live in their own homes, making the provision of appropriate housing and housing support services essential to meeting their needs.

The Housing LIN was commissioned by The Guinness Partnership to undertake an independent evaluation of the progress made in becoming a more dementia-friendly organisation. Guinness implemented a two year project in 2015 to take forward developments, initially in two pilot areas of Havant and Manchester with a view to rolling out successful approaches more broadly.

“This report highlights that The Guinness Partnership recognises the scale of the dementia awareness challenge. Guinness has not just invested in the physical buildings, but in training and research – meaning that it can tailor its services. And because staff awareness is so much higher, dementia-friendly thinking is part of Guinness’s day-to-day approach.”