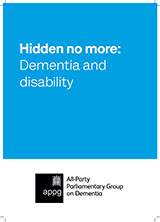 This 2019 report from the All Party Parliamentary Group on Dementia shines a spotlight on dementia as a disability. It seeks to enable people with dementia to assert their rights to services and for their rights as citizens to be treated fairly and equally.

Dementia is a disability, according to domestic law and international convention.

Thousands of people who responded to the All-Party Parliamentary Group (APPG) inquiry (opens new window) agreed that they see dementia as a disability. But they told the APPG that society is lagging behind and failing to uphold the legal rights of people with dementia.

The evidence reveals that, across the country, people with dementia are not having their disability rights upheld. This report seeks to highlight the human impact that this has on people living with dementia. It focuses on themes of equality, non-discrimination, participation and inclusion.