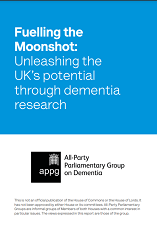 This report, written by the APPG on Dementia, details the findings of the Group’s inquiry into dementia research and what role the Government’s commitment to funding a ‘Dementia Moonshot’ can make. During the inquiry the Group heard from a wide range of stakeholders to better understand the issues presently faced by the sector and where there are opportunities to cement the UK’s status in the field of dementia research.

This report’s central recommendation is for the Government to deliver on its manifesto commitment and fund the Dementia Moonshot as soon as possible, working with stakeholders to establish a timetable for this funding to be brought forward.

Accompanying this central call to the Government, the report also makes several recommendations. These are: