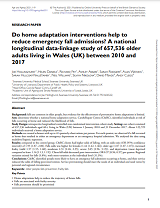 This study clearly demonstrates the value of home adaptations in supporting more frail and vulnerable older people to live safely for longer in their homes, as well as benefits to the NHS. This is positive news for practitioners, useful for commissioners and helps to fill a recognised evidence gap in this service area.