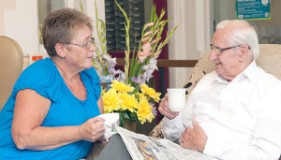 Dee has optic neuritis, inflammation of the optic nerve, which damaged her eyesight ten years ago. The condition means that she finds it difficult to detect something unless it is moving, or if it contrasts strongly with its background. She is able to follow familiar routes and can use a PC and mobile phone screen but has difficulty reading and writing.

She lives in a studio flat and her landlord has installed new lighting. In the studio, linear fluorescent lights were replaced by dimmable linear LED luminaries, one over her bed and the other on the opposite side of the room, close to her wardrobe and cupboards. The lights are operated by large, easy to use ‘rocker’ dimmer switches.

Dee says the ability to turn up the light by the wardrobe is good for picking out clothes that go together. She can’t put up with bright light for more than half an hour but has an adjustable light beside the settee that gives good direct light for a task but is shielded from her eyes.

In the kitchen, there is another dimmable linear LED luminaire on the ceiling, LED self-adhesive strip lights over the worktops and lights over the hob in the extractor unit. Dee says the kitchen lighting is ‘brilliant’; there is no glare from under-cupboard lights and the ability to dim the main light is a big help. She finds cooking far easier now that she has the over-hob lights.

The wall tiles in the kitchen have a gloss finish, which can be difficult for people affected by glare. Dee says that glare is not a problem for her but ideally tiles and surfaces should have a matt finish. In the bathroom, two circular LED ceiling luminaries have been installed on the ceiling, plus a sensor-operated over-cabinet light. The ceiling lights are on one switch and not dimmable. Dee would ideally like separate dimmer switches for each light as she often doesn’t want the bright lighting, but this would require re-wiring of the bathroom lighting.

As with the kitchen, the existing tiles have a gloss finish and also little contrast with fittings. Dee doesn’t find that glare or reflections off the tiles cause any problems but the lack of contrast is not ideal for her. Overall, the new lighting is major improvement, as Dee needs things brighter to be able to see detail, but also needs to have lower lighting levels when not doing detailed tasks.