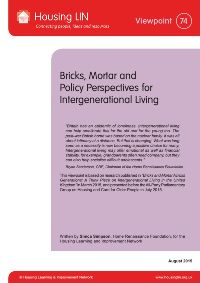 This Housing LIN Viewpoint no 74 is based on research published in "Bricks and Mortar Across Generations: A Think Piece on Intergenerational Living in the United Kingdom" in March 2015, and presented before the All-Party Parliamentary Group on Housing and Care for Older People in July 2015. In particular, it:

And finally, it presents the findings of interviews with policymakers, practitioners and thought leaders, and calls for a Commission on Intergenerational Housing.