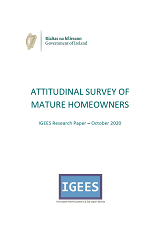 The survey assesses the willingness of mature homeowners to downsize and their responsiveness to potential measures that could encourage them to downsize. Its estimated that between 15 and 20 percent of mature households would be willing to move if they were able to downsize and generate savings from the move.