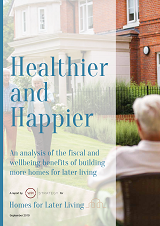 A new report authored by former Treasury economist calls for 30,000 additional homes for later living every year to boost mental and physical health of older people. It identifies that the NHS could be overwhelmed by nearly a million extra older people suffering from falls related injuries, as new research reveals a link between good quality housing and physical and mental health outcomes for older people.

These findings are part of a major research project for Homes for Later Living, a new consortium of housing providers who specialise in homes designed for older people. It says that as Brits are living longer, the number of people aged 80 or over who will suffer from falls is expected to rise from 1.6 million today to around 2.5 million in 2032, a rise of 900,000. In line with this increase, by 2032 the total cost to the NHS of falls amongst the elderly will rise to £2 billion a year.

The report says more needs to be done to focus on the link between poor health and the quality of housing available to people in later life. It highlights a severe shortage of housing being built specifically for the growing numbers of retirees. The result is that many older people are often living alone in mainstream housing that is unsafe, unsuitable and unhealthy, and this is where they are most likely to suffer from falls, social isolation and dementia.